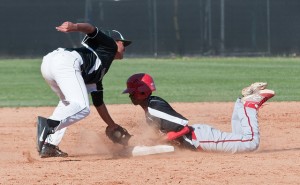 With the Cleveland Indians playing in the 2016 World Series, a local theater showed the cult classic, Major League. Do you spot any errors in this sentence from an announcement of the special showings?

Lead by veteran player, Jake Taylor (Tom Berenger) and a new rookie pitcher, Ricky Vaughn (Charlie Sheen), this would-be losing team shows them just what their made of and starts winning just to spite her.

1. Oops. We have a surprisingly common error in the first word. That should be the past tense led, of course. (Get the lead out?)

2. Here’s a tougher one to catch and properly correct and explain. If we have a comma in front of Jake Taylor, we need to finish the job with a comma after the parenthesis following Berenger. But wait. The “correct correction” is deleting the comma before Jake Taylor because veteran player is just an adjective phrase describing who Jake is. (The two commas setting off Ricky Vaughn, however, are correct because of the word a. If we took out a, we’d treat Ricky the same as Jake: and new rookie pitcher Ricky Vaughn (Charlie Sheen).

3. Ouch. We were expected to know the difference between there, their, and they’re by third grade. Mistakes at that level undermine our credibility.

So we end with this: Led by veteran player Jake Taylor (Tom Berenger) and a new rookie pitcher, Ricky Vaughn (Charlie Sheen), this would-be losing team shows them just what they’re made of and starts winning just to spite her.

That Tribe team emerged victorious. Now I’m hoping for the real one to do the same.

You can learn more about my workshops on writing in the workplace, individual coaching, editing, and handbook – 100+ Instant Writing Tips – at http://www.normfriedman.com/index.shtml. Thank you.