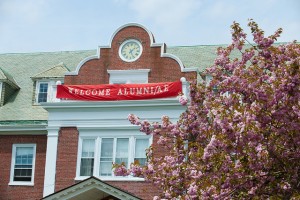 If you took Latin, maybe you get cranky, too, because you can’t go on a trip anywhere and chat in Latin – unless it’s to your old Latin teacher’s house. But what really perturbs me is pulling up at a light behind a car (that could have gone through on yellow) with one of those license plate holders saying something like “QZU Alumni.”

Oh, really? Well, I see just one person in the car ahead of me, and “alumni” is plural. So what is this license plate holder saying? That QZU alumni are … mainly clueless Spanish and French speakers?

But you’re right. I shouldn’t get all huffy with the driver. It’s the folks in the school’s alumni office who deserve the blame. All they need to do is order some holders that say “OSU Alum.” That shorthand works for a gal (an alumna) and a guy (an alumnus), and it’s singular.

So is “criteria” singular?

Although “alumna” is singular, “criteria” (coming from Greek, not Latin) is plural. The common error is using “criteria” when we want the singular, “criterion.” Note the difference:
Let’s rank the potential contractors on these five criteria.
If the only criterion were cost, the choice would clearly be Hit-or-Miss Plumbing.

A PS on pronunciation

Pronouncing “alumna” and “alumnus” is easy, but what about the plurals? You had to ask. The last syllable in “alumnae” is pronounced “nigh” in Latin class, but just about anywhere else it’s anglicized to “knee.” And “alumni” is the opposite: “knee” in Latin class but “nigh” outside class. Now you can talk about your alumni weekend with confidence.

This entry was posted in Commonly Confused Words. Bookmark the permalink.